It is a well known proverb that Rome was not built in a day. There are many testimonials to the history of this magnificent city in the form of churches, cathedrals and other important monuments which are of great interest for historians and tourist alike. Of these, one specific church stands out from the rest considering the history associated with it. The Santa Prisca titular church is a must visit tourist attraction in Rome located at Aventine Hill. Named after Saint Prisca, an honored Christian saint and martyr from the 1st century, this church has many visitors from all around the world. 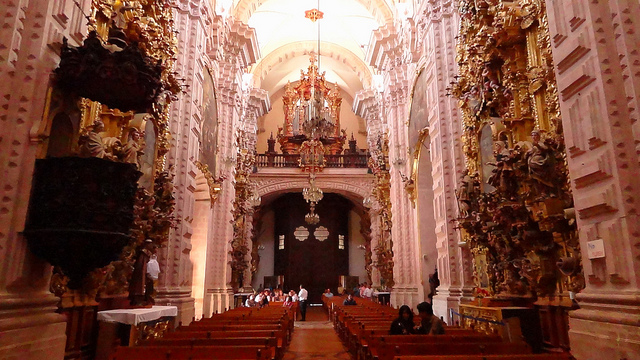 This beautiful church was first built in 4th or 5th century under the name Titulus Priscoe as a memorial for Saint Prisca and is one of the must visit places in Rome. Of the many myths associated with the identity of Saint Prisca, one tradition claims that Saint Prisca is the name of Priscilla from the Aquilla and Priscilla in New Testament; though the true identity of Saint Prisca is still unknown. Legend has it that Saint Prisca was tortured and brutally executed as she followed Christianity as her religion. She has been revered as a saint and martyr by the Roman Catholic Church and the Orthodox Church. In 1934, the Augustinian friars carried out archaeological excavations at the site of the church that was built on a temple of Mithra and above a Mithraeum and it was in this year that this parish church was established. This ancient church was destroyed and restored several times. Santa Prisca was once demolished to a great extent during the Norman Sack of Rome, however it was again restored in 1660 which is the last restoration performed on this titular church. Frequent Santa Prisca tours are conducted by many popular historians and renovators from all around the world.(image by andrescolombia)

Rome has grown into a very popular tourist hub and Santa Prisca tours are undertaken by visiting tourists from all around the world. Guides present at the Santa Prisca church possess good knowledge about the history of this church and the tourists are well informed and educated about the various aspects of Santa Prisca which is undoubtedly among the must visit places in Rome.(image  by renebasurto)

Santa Prisca tours bear the fact that the only remnants of the ancient church are the columns that make up majority of the interior of Santa Prisca. After undergoing many restorations, the originality of the ancient church was lost, though many architects have tried to recreate the church to the best of their ability. The latest restoration of Santa Prisca included a façade built by Carlo Lombardi which constitutes the beautiful exterior of this church. The relics of Saint Prisca are conserved in the altar along with the baptismal font that was used by Saint Peter. Antonio Tempesta painted the frescoes in the crypt and there are many other paintings such as ‘Saints and angels with the instruments of passion’ by Anastasio Fontebuoni and ‘Immaculate conception with angels’ by Giovanni Odazzi. All these masterpieces make Santa Prisca among the must visit places in Rome.

One of the must visit places in Rome near this church is the Sisters of the Holy Face, a Roman Catholic religious women organization. The National Academy of Dance is also located near the church and both these attractions make Santa Prisca tours more interesting.