Whether you love following The Royal Family or binging shows like ‘Sherlock’, you must have come across much British slang. Believe it or not, British insults are some of the most beautiful words around. British slang words vary greatly from area to area. Or, even city to city. Each district has its own unique slang and insults. For example, the British insults in London alone can be so dissimilar that you get puzzled. Now, you as an American may not know what they really mean. Well, we got your back. In this article, we will try to guide you through the amazing world of British slang.

40 of the most beautiful British insults, slang, and phrases

In Britain, the word “lad” means “dude”. It is mainly used to refer to younger men or boys.

“Bonkers” is another beautiful British insult. It means “mad” or “crazy”. However, it is not always used in a negative way.

This word is chiefly used to mean that something is a little stupid or silly. It’s not necessarily offensive though.

This phrase means “to have a tantrum”. However, it is mainly used to describe adults who should have known better.

“A cuppa” means “a cup of tea” It is sort of an abbreviation. The British are huge tea enthusiasts. So, you are likely to hear this expression often.

In Britain, “bloody” is used to emphasize a comment or a word. It is mildly offensive and often regarded as a mild expletive. But, the British are usually okay with it.

“Can’t be arsed” is a British slang that means you “can’t bother to do something”.

“Uphill Gardener” is another way to define a homosexual person. It is a British insult and often used in a derogatory manner.

The expression “Bell End” basically means “dickhead”. It is also used to define a man’s penis.

“Lazy Sod” is an interesting British insult aimed at an incompetent and stupid person. It means “useless idiot”.

The term “wazzock” came from Yorkshire. It refers to an unbelievably dumb individual who can only do manual labor.

Arse-licker is another interesting British insult. It is the American equivalent of “bootlicker” and refers to a sycophant.

“To leg it” means to “run away”, typically from some kind of misfortune.

In Britain, “plastered” means “drunk”. It’s interesting as you can add an “-ed” at the end of almost any word to convey the same meaning. Take “trollied” for example. Creativity at its peak, right?

“Dodgy” is a British slang that refers to “someone who is a bit sus”. Yes, yes, that was an Among Us reference. Nevertheless, you can use in context to food that tastes off the map. Or, a person who seems a little shady.

“Gobsmacked” is strictly a British expression. “Gob” is a British term for “mouth”. So, “Gobsmacked” means “to be surprised to the extent of being speechless”.

The expression “prat” is a British insult. You can consider this the American equivalent of “idiot” or “asshole”.

Trollop is a British expression used to refer to “a lady with questionable morals”. Although it is used in a humorous way, it is a derogatory way of alluding to a promiscuous woman.

Pikey is a British insult aimed at Gypsies or Irish travelers. It basically means “white trash”.

“Barmy” is a British word for “a stupid or foolish person”. In essence, “Barmy” is that person whom Americans would call “crazy”.

Daft cow is another beautiful British insult. This one is mainly directed against “a large woman who is dumb”.

This British insult is a derogatory way of referring to “an extremely haggish woman”.

“Knob Head” is similar to the expression “Bell End”. It is a British way of saying “dickhead”.

“Arsemonger” is a British insult that refers to “a person who gives rise to nothing but contempt”. Simply put, an arsemonger is a person whom you would like to punch in the face whenever you see them.

The phrase “like a dog with two dicks” basically relates to “a man whore”. It is the male equivalent of the word “slut”. Thus, it is very offensive and should not be thrown around carelessly.

Another dog-related British insult. Ha-ha, just kidding. The expression “gone to the dogs” means that “someone or something has become ruined or rotten”.

“Mad as a bag of ferrets” is what an American would refer to as “crazy”.

The term “mingebag” means “a bad person”. In British English, it refers to “a cheap asshole”.

“Dead from the neck up” means “idiot” or “stupid”.

“Chav” is a British insult that conveys the same meaning as “pikey”. It means “white trash”. However, it is used to refer to “a low-class individual”.

“Cheese-eating surrender monkeys” is a pejorative term used by many Brits to describe French people. It is very offensive and you shouldn’t use it casually.

“Wanker” is another British insult that refers to “a stupid person”.

“Slag” alludes to a harlot of the worst kind.

“Grafting” is kind of a Scottish way of saying “flirting’. It is used to describe a lad who is trying hard to get a girl to fall for him. You are likely to hear people saying this one frequently on the British Love Island.

“Muppet” is another great British insult meaning “an ignorant or clueless individual”.

“Nosh” is a slang used by British people to define “food”. For example, “Jacob was having all kinds of nosh at the restaurant”.

“Daft as a bush” as a British insult denotes “a silly or stupid person”.

“Faffing around” is a very British expression meaning doing nothing fruitful. It also refers to spending too much on performing a task that should be relatively quick. 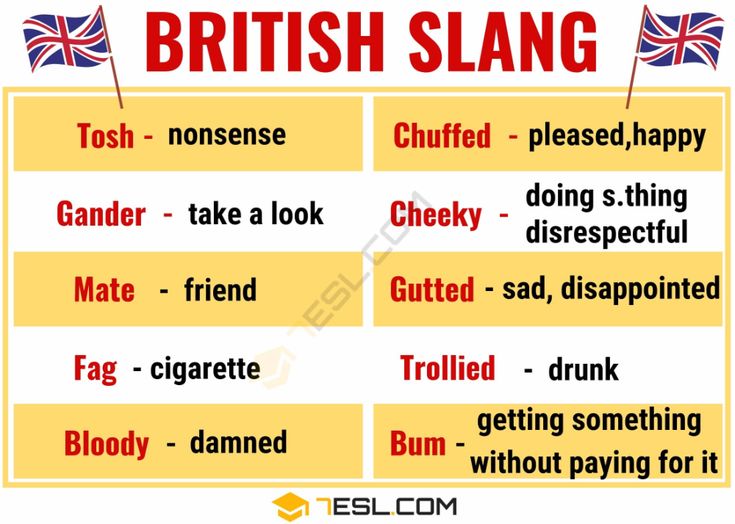 British slang is an important part of the British vocabulary. They tend to make British English all the more magnificent. Yet, you can hardly find comprehensive study material to study British slang. So, what can you do? Let’s discuss some of the best and easiest ways to learn British slang:

Watching British TV shows is one of the easiest and most convenient to learn British insults and slang. Shows like “The Inbetweeners” and “Peaky Blinders” are perfect in this regard. You can also opt for “Little Britain” or “Misfits” among others. These shows contain a lot of British slang and phrases. You just have to keep your ears and mind open.

Conversing with a native speaker

It’s a no-brainer that nobody knows British slang better than the Brits. So, the quickest and most efficient way to learn British slang is to converse with a native speaker. But suppose you have no British acquaintance or friend. How to find one? Well, you can take the help of various online chatting app out there. Just install, add British people as friends, and send them texts or voice messages.

What is a chav in British English?

“Chav” is a British word that means “white trash’. It also denotes “a low-class person”.

What does innit mean in British slang?

“Innit” in British English is the same as “isn’t it,” just shortened. Like American English, it is used as a filler in dialogue or when the speaker seeks affirmation. For instance, “it’s nice, innit?”

What are some common British phrases?

Some of the common British phrases are “hat trick”, “chuffed to bits”, “take the biscuit”, “taking the piss”, etc.

How do you say funny in British slang?

“Being funny” is a British phrase that means “a person is acting funny or comical”. However, it can also mean that something is not right, e.g. “the room smells kinda funny”.

It is not possible to enlist every British slang out there in a single article. But we tried to give you a list of 40 handpicked British insults, slang, and phrases. It is bound to expand your vocabulary. Also, follow the methods mentioned here if you want to learn more such slang. All the best!