The Nazca Lines are located between the towns of Nazca and Palpa along the northern Pacific coast. Created between 200 BC and 700 AD the figures range from simple lines to stylized spiders, monkeys, fish, llamas, lizards and human figures. The lines were created on such a large scale that it wasn’t until the 1920′s, when Peruvian airlines started to fly from Lima to Arequipa, that they were recognized as figures. Hotels and tour agents in Nazca offer round flights in a Cessna to view the lines. There is also an observation tower along the Pan-American highway with a view of three of the figures. 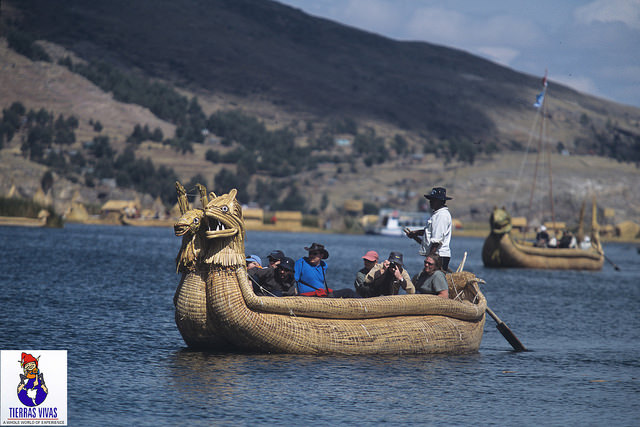 Founded on October 2, 1580, the Santa Catalina Monastery in Arequipa covers a walled area of 20,000 square meters with walls, streets, walkways, stairways and small squares. The monastery is predominantly of the Mudéjar style, and is characterized by the vividly painted walls. It is one of the most important monasteries of colonial Peru and Latin America.

Made of dried totora reeds, the artificial islands of the Uros are Lake Titicaca’s top tourist attraction. The lives of the Uros, a pre-Incan people, are interwoven with these reeds, which is a primary source of food and are also used to make their homes, their boats and even a reed flower tea. Reeds are added to the top of the islands constantly, about every three months, as they rot from the bottom, so the ground is always soft and springy.

The Plaza de Armas is the center of the historic section in Cuzco. The original plaza was built by the Incas and was known as the “square of the warrior”. Almost twice the current size, it functioned as the cultural center of Inca life. Cuzco, which was the capital of the Inca Empire, was designed in the shape of a Puma and the plaza was intentionally built at the location of the heart of the Puma, in the center of the city. The Spanish reduced the size of the plaza by building two Churches, the Cathedral and the Church of La Compañía.

Colca Canyon is a canyon of the Colca River, in the Andes mountain range, in southern Peru. It is more than twice as deep as the Grand Canyon, but the canyon’s walls are less steep. The big attraction here, in addition to the awesome sights, are the Andean condors. The condors can be seen at fairly close range as they float on the rising thermals.

One of the most beautiful and impressive ancient sites in the world, Machu Picchu is the undisputable nr 1 among the top tourist attractions in Peru. The Lost City of the Incas is invisible from the Urubamba Valley below and completely self-contained, surrounded by agricultural terraces and watered by natural springs.