I am going to tell about an important thing, on the basis of which you can survive a plane crash.

Plane crashes are very rare but still it is the most feared of them all. It is always good to be prepared for everything, you might never know what could happen next ahead of the present. There is no harm in making note of what I say, this will help you in case of any mishaps on your flight trip, because this could be your chance of survival.

According to a test made by the NTSB (National Transportation Safely Board), a crash test plane which was controlled by a remote with test dummy passengers on board was made to crash. 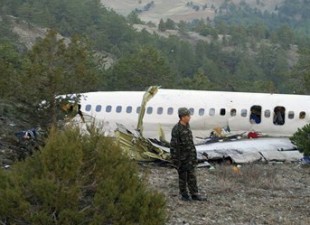 The experts also had to say that the test dummies with their heads between the knees did not get much injury and the ones with which were sitting erect with their seat belts on, got injured badly but could survive. And the ones that did fastened their seatbelts got thrown away from the plane or observed injuries endangering their survival.

Based on a report to find the safest seat on the plane, 4 out of 5 cases had to say that the last ones are the safest ones and the safety reduces as you go up in front to the frontal seats of the plane.

Another report says that the aisle seat is allot safer than the window seat, people have escaped the crash using the nearest exit.

The experts conclude that the back seats near the aisle with the knowledge of the exit door, is the safest thing that you do when you board a plane. The most important thing, is that you know how to unbuckle yourself when at crucial time, within 90 seconds you should get to the nearest exit provided that you do not panic at the moment and choose to be wise enough to save yourself.