Busan’s population, the second-largest city in Korea and a gateway to the world, is 3.6 million. With its mild climate and beautiful atmosphere, Busan is cultivated with love and affection by its people. Busan has repeatedly made tremendous progress since the Korean War. It has developed into a mecca of maritime logistics with world-class mega ports, as well as being a gateway to the world-connected Eurasian continent.

Furthermore, through the efficient hosting of different international events, Busan stands shoulder to shoulder with many prominent cities all over the world. It is also a tourist city that is regularly visited by people from all over the world. In particular, Busan is developing industrial structures that will direct the future, such as films, visual material, and finance, to become a city of wealth and a green city that always thinks about the environment.

If you’re travelling to South Korea for the first time, you must go through the best things to do in Busan. This way, you can enjoy your trip and make the most out of it.

You’ll soon learn that the top tourist destinations in Busan are anything but dull, even though you can hardly spend and enjoy one day in Busan. It’s hardly a challenge to fill your days with all the best places to visit in Busan, from dazzling mountainside and seaside temples to relaxing on white-sand urban beaches to splurging on food & all the new fashions.

In this article, we will be listing the best places to visit in Busan and what kind of things to do in Busan. 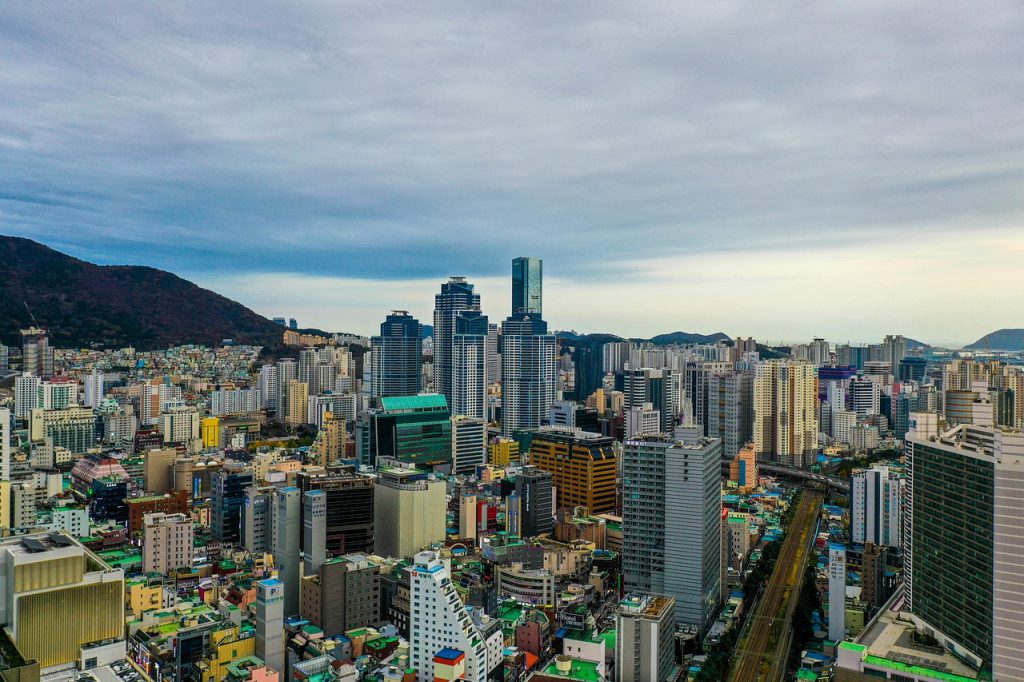 Things To Do In Busan

Visiting this landmark is, as you can guess, one of the most famous Busan tourist attractions in Busan. When you arrive, the safest thing is to only experience the temple at your leisure. Including the colourful Daeungjeon Main Sanctuary and gilded Buddha sculptures to the stone pagodas, stupas, and cave sanctum, visit its nooks and crannies. Visit this amazing temple as early as possible and get the best out of your visit to this top Busan attraction.

At 5 am, Haedong Yonggungsa Temple opens to tourists. When the morning sun bathes the temple complex in its warm orange hues, this is the ideal moment to come, creating a scene that’s nothing short of glorious. Undoubtedly, not only in Busan or South Korea but everywhere! This is one of the most lovely sunrises you’ll ever see! Way to the Temple of Haedong Yonggungsa It’s a bit of a hike to the temple complex. Hop on the Busan metro first and make your way to Haeundae Station (Line 2). Move to Bus 181 at Exit 7. Around 12 minutes away is the Yonggungsa Temple Bus Station. It’s another 15 minutes by foot to the temple from there. 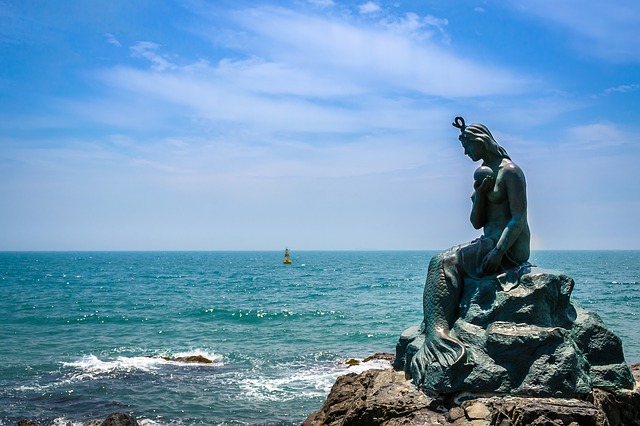 Haeundae Beach is on the coast of the Haeundae District in eastern Busan. Over the last few decades, the great allure of this sandy shoreline has spurred tremendous growth, and now many skyscrapers surround the beach, including Haeundae LCT The Sharp and Haeundae Doosan the Zenith, both over 300 meters.

Haeundae Beach is a 1.5-kilometer arc of pale sand, which faces south, unlike Busan’s other big beaches, opening it up to the south wind, which produces crashing waves of up to 1.5 meters that break out in this low-shelf bay well away.

There’s a line-up of festivals and activities here all summer long, such as the June sand sculpture festival and the city-wide Busan Sea Festival in August. This opens up with concerts and a series of beach-side fireworks and ends with a Water Carnival a few days later, presenting dance teams and EDM shows, and this is also one of the awesome things to do in Busan.

One of the most fun things to do in Busan is visiting Yeong-Island because it’s one of the best Busan attractions. Yeong Island is connected to Busan’s mainland in the downtown district of Nampo-dong through a bridge, which drives south-east through the Korea Strait. The further you go on this mountainous island, the sparser the development, and natural wonder is at its very top. Buffeted by the sea, Taejongdae is all thick evergreen forest and rugged coastal scenery with caves and lofty cliffs.

There is a lighthouse, churches, a small theme park, a wild pebble beach, a cruise port, and a cliff-top observatory where you can see Japan’s Tsushima on clear days, about 40 kilometers to the south. If you feel energetic in this steep atmosphere, a road train (Danube) can take you to the most scenic spots, which are also connected by a walking path. 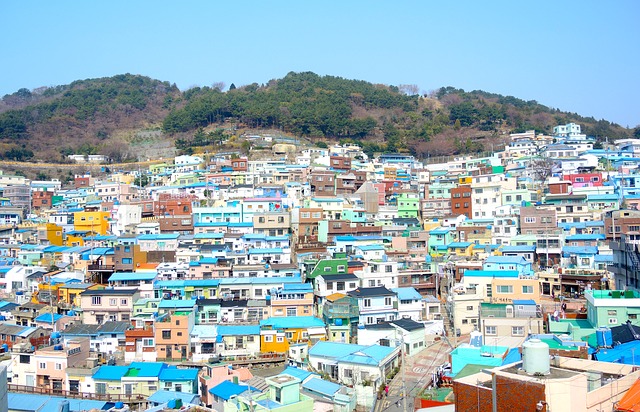 Gamcheon is used as a rural village in South Korea. This indicates that once, it was in a run downstate. The residents realized they were getting tired of the area looking to run down and working to turn the village into a rainbow tourist attraction. They’re selling a map of the village that will lead people on a scavenger hunt. This scavenger hunt includes gathering postcards and stamps to see a variety of outstanding works of art on display.

Drop by a restaurant or café for a bite to eat and experience whatever trend has been set for that particular location. Several restaurants have their own exclusive style, which gives you an incentive to come back and try out new locations.

One of the Busan points of interest is their tasty food. Trying cuisine that is local to the region is part of the experience of a foreign country. Busan cuisine is not something that is going to be on the shelves of Wal-Mart when you head home. Who knows whether and when you’re going to go back to South Korea or Busan exactly, then why do you get it?

Trying new food may be one of the things to do in Seoul, but don’t be afraid to get off the beaten track. Dwaeji Gukbap is the most popular Busan dish to try. It is a stew made of a broth of boiling pork bones. It’s got pork and vegetables in it together seasoned with some other additional ingredients. Wonjo Halmae Gukbap and Twin Pork Soup Restaurant, both in the middle of Busan, are known to be the best places to visit for this stew. When visiting the food markets, try to find some Sat Hotteok, the Busan version of the pancakes.

All these incredible things make Geumjeongsan Mountain one of the finest hiking spots in Busan and South Korea. If you some spare time or love to be in the midst of the great outdoors, you can certainly go for a stroll around Geumjeongsan Peak. The Temple of Beomeosa is currently situated on Geumjeongsan Peak, which means you can rest for a short stroll.

This mountain is not too difficult to walk, and reaching the top will reward you with a beautiful view of Busan down below. The remains of what was once the Fortress of Geumjeong is one of the famous Busan attractions.

Igidea Park is one of the “off the beaten road” things to do in Busan. This coastal walk takes you past Gwangan Bridge and Haeundae Beach. A walk down this trail would encourage you to see a lot of Busan, probably including some of the attractions you’ve already seen or are planning to visit.

It’s a great place to do some exercise and some sightseeing. There’s a spot at the south end of the park that looks out over the five islands of Oryukdo. If you choose to reach Oryukdo by ferry, you can stroll along the sky bridge with a glass rim. It can be a cool and very anxious experience, which makes it a chance that can not be overlooked.

You can also visit the nearby Haedong Yonggungs Temple when visiting Igidae Park. Both of these attractions are located closely, so you can explore them both in a single day. And that is one of the most famous Busan tourist attraction.

Beomeosa is Perched on the secluded eastern slopes of the 800-meter Geumjeongsan Range. Beomeosa is the head temple of the Jongye Order of Korean Buddhism. It is one of the three most prominent temples in the Yeongnam region of South Korea and its history dates back to 678 CE under the reign of Silla King Munmu. Most of what you see today goes back to the beginning of the 17th century when the temple was heavily destroyed in the Japanese conquest of Korea (1592-1598). The complex is wreathed in wild wisteria and lavender, which is beautiful as it blossoms in the late spring. You’ll have a collection of Korean National Treasures to take in, including the heavily ornate main temple hall (Daeungjeon), one of the best works of Joseon Dynasty architecture in Korea.

Other attractions include the three-story stone pagoda, the Iljumun (one-pillar gate), the eastern and western pagodas for the surrounding Wonhyoam hermitage, and the ancient stone lamp and flagpole keeper. Visiting this place is one of the best things to do in Busan, and there’s a Templestay service for people who want to get a feel for Jongye Buddhism and get out of town for a couple of days. 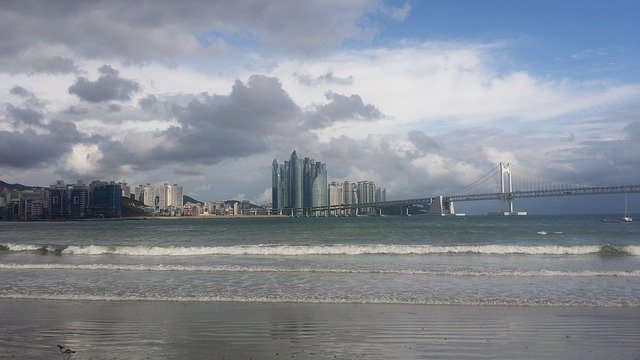 Gwangalli Beach is one of the most famous beaches in Busan attractions which is 1,4 kilometers long and more than 100 meters deep, has smooth, fine sand, and good water quality after development in recent years.

You’re never going to starve at Gwangalli Beach, as there are more than 300 hotels, cafes, and sushi bars just a few measures, and eating is probably the best thing to do in Busan. What’s going to reach you straight away is the image of the mammoth Gwangandaegyo suspension bridge spanning the bay a few hundred meters to the sea. The shore here is the perfect spot to witness the Leadlight display of the bridge after sunset.

More than a million people assemble at the beach and the promenade behind the Busan International Fireworks Festival, one of the biggest fireworks activities in Asia, and held at the end of October in two evenings.

Visiting Gukje Market is the best things to do in Busan. It is evident at this point in the list that Busan and South Korea, in general, have a good range of different markets. These markets sell a range of food products to accessories. If you go to Busan, the chances are that you’ll end up hitting a few markets.

Your travel to Busan should include at least one visit to the Gukje Market. They’ve practically got everything. So if you ever need a certain object, you’re bound to find it. The industry has been around since the Korean War when refugees were in Busan. If you get a chance to try out the Gukje Market, it is recommended that you also visit the nearby Kkangtong and Bupyeong Markets.

This post listed the top tourist attractions in Busan and the best things to do in Busan. There’s a list of adventurous places where you can go and enjoy your holiday, and there are a lot of beaches in Busan that make you feel comfortable and godlike. With some fun places to eat, your journey to Busan is going to be a great one.